Originally named St. Andrew’s Tower, this was an early speculative office scheme by LRW in their catalogue of commercial development that swept across the city through the 1960s. The tower was deliberately set back from the historic line of Portland Street to make way for the city centre ring road that never came to be. The bus station and car park were later joined by a pub, shops and a barber's to form an eclectic mix of programmes, without precedent at the time. A development of this scale with a ramped access that traversed the existing streets and landed in the next block was certainly bold. The tower was a concrete frame given stiffness by the core and gable walls. The gable walls are now painted, the architect’s intent for the unfinished dark pre-cast units, was to convey the load bearing quality of this element. The visual appearance of the tower is no more the sum of its elements, and the glazing systems as specified and built did not provide sufficient relief to the façade. LRW themselves acknowledged the limited success, bemoaning that the blanket curtain wall glazing of the adjacent GPO building had much the same ‘effect of moulding’.  The car park ramp plugs into the rear of the tower, providing the kind of connected city that planning ideals leant toward at the time. The upper level walkway schemes for the Universities are well publicised, those for the inner city less so, though there are numerous examples of unbuilt schemes that demonstrate such. On ground level, beneath the car park, the operator used to permit the passage of buses through in a one-way circulatory system. This has now been filled in, and the environment whilst brighter, cleaner and undoubtedly a stronger revenue generator has lost the flowing character that was somehow emblematic of the entire proposition. The whole building feels tired despite the bright lights of the new coach station. 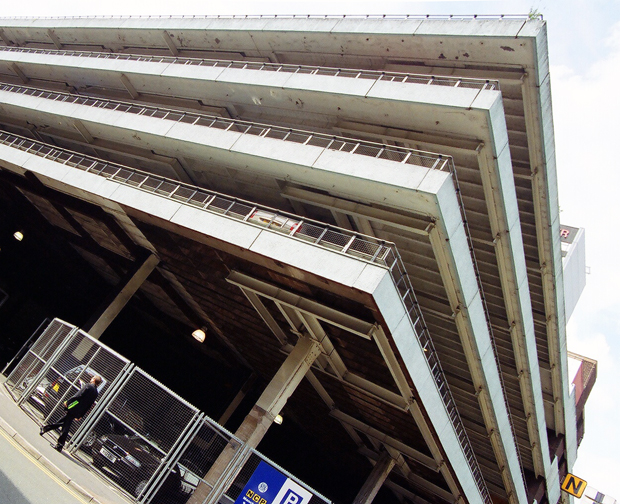