The Roscoe Building is to the University of Manchester what the Renold Building was to UMIST; its purpose was the unification of disparate lecture rooms into one building. In this instance it was a central hub for the Faculty of Science. Both buildings are by Cruickshank and Seward and share traits, though the Renold has arguably more flare. In the Roscoe Building the ground floor houses the smaller of the two main lecture theatres, the larger is an appendage to the main building, but both are accessed from the main foyer. As one ascends, the five upper floors are served by a central corridor flanked by smaller offices and laboratories on one side and larger flexible teaching and seminar rooms to the other. The glazed stairwell is expressed as a separate element. The appraisal of the scheme in the AJ Building Study made claim that, ‘aesthetically the relationship of this staircase with the main tower is scarcely resolved, but the design has achieved the aim of making this an exciting staircase to use’. This was the aim of the architect – if all the seminar rooms and lecture theatres emptied at the same time, there was not enough capacity in the two lifts to move everyone. The climb up the stairs is rewarded with a good view of the city centre, a photograph of which was illustrated in the same pages. The clear expression of the component parts of this building is a functional response to the demands, but also the part of the formal language developed through Cruickshank & Seward’s practice. Strong volumetric forms became something of a motif in the work of both John Seward and Arthur Gibbon. 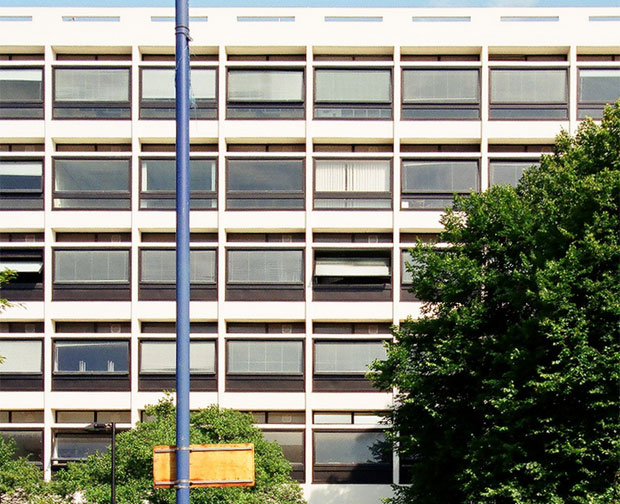