Peter Womersley was born in Yorkshire and settled and practiced from Scotland. He made intermittent professional forays south of the border. Perhaps the most celebrated of these is Farnley Hey near Huddersfield (1953) a reflection of the contemporary style of American living. This house, some eleven years later is much more austere and is known as the ‘White House’, it was commissioned by the Heald family, successful local dairy owners. The conceptual ideas of projecting smaller volumes around communal space that underpin this scheme were developed from an award wining Sunday Times competition design and can also be seen in another house by Womersley - Valley Spring at Coombe Down in Bath. A series of bedroom boxes fanned around a central living core which opened onto a three sided terrace.  A higher roof floats above the core allowing light to pour through a ribbon of clerestory windows. The whole house sits on a podium. Womersley was known to be fiercely uncompromising and has been said to be more concerned with image than operation; he was a fan of level thresholds, even in rainy climes, for example. Here, this sunken site was undoubtedly susceptible to flooding and was indeed flooded more than once, both during and post-construction. The solution was to build a bund to protect the house from the floodwaters of the River Mersey, which unfortunately disguises most of the building from view and most of the view from the building. The low bungalow was intended to directly engage with the verdant context of the park but no longer sustains that formal relationship. Recently an upper level has been added to designs by Fasciato Architects of Wilmslow. 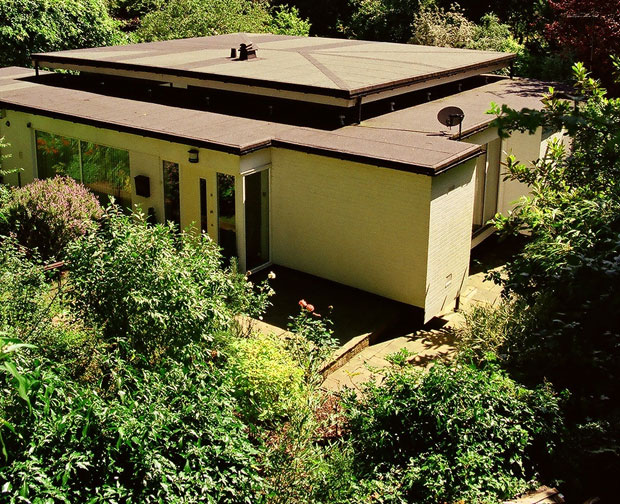