Tucked away in North Manchester, within the grounds of a Further Education College, sits this unassuming miniature version of the Metropolitan Cathedral at Liverpool. Whilst generally inconspicuous, the building actually sits on a small rise within the college grounds that appears to accentuate its symmetrically ascending form. Brother Augustine, the commissioning party, studied at Magdelene College in Cambridge. He had admired the small round church just by Magdelene College and wanted a similar chapel for Hopwood Hall. The chapel was completed during the construction phase of Liverpool and whilst the similarities are immediately apparent, the chronology and influence of each project on the other remains unclear. It is an in-situ concrete framed building, octagonal in plan. The cranked columns rest in the corners and are tied by a ring beam at the groin, before rising vertically to form the structure for the glazed roof cone. The main body of the roof is clad in copper. The clear span made for a simple liturgical space that responded to the New Liturgy, much as Desmond Williams did at St. Augustine’s. 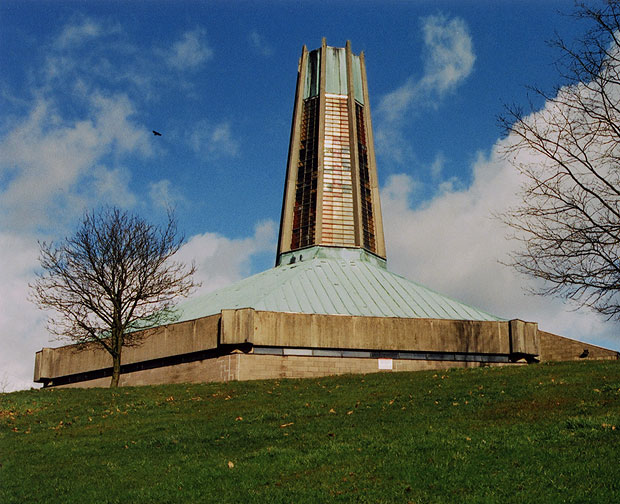