This former warehouse sits in an area now known as Granby Village, a series of new build and warehouse conversion apartment buildings by Halliday Meecham, 1989. The front elevation of the six-storey Orient House is profusely decorated in moulded faience of classical influence. It is the sides and rear of the building, though, that provide the characteristics allowing Orient House to assume its position here as one of the earliest ‘modern’ buildings in Manchester. The uncompromising square grid of the exposed steel structure and the modular repetition of the floor to ceiling glazing system may be familiar language now, but were revolutionary in their time. The working environment was vastly improved by the provision of large amounts of daylight. It is this approach to natural lighting that has allowed the successful conversion from warehouse to apartment; the full height window has become a prerequisite to inner city living. The view from the train viaduct that runs between Piccadilly and Oxford Road reveals this progressive structure in all of its reductive, repetitive beauty. In 1969 Dennis Sharp wrote, ‘Today it is not the embellishments on the front that demand attention but the functional aspects of the structure starkly expressed against simple infilling’. 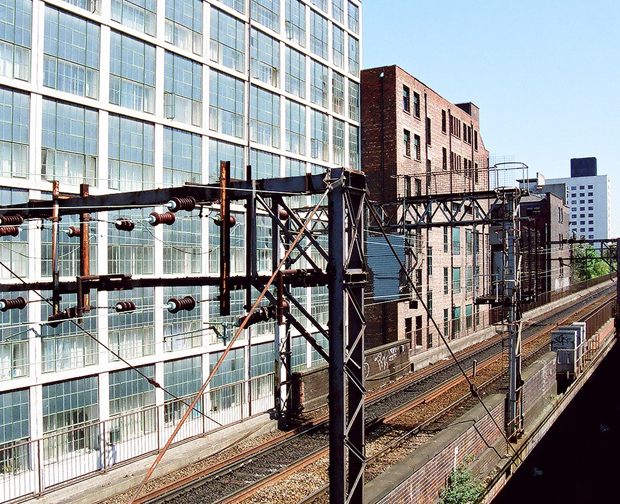