Tom Mellor was a talented designer and architect, born in Lytham and alumni of the Liverpool School of Architecture. Early in his career he worked with George Grenfell Baines, who went on to found Building Design Partnership. In 1952 he was appointed as design consultant for the progressive Lancashire textile firm David Whitehead and responsible for bringing modern art to the masses in the form of artist-designed contemporary furnishing fabrics; he is known to have commissioned John Piper and Henry Moore, amongst others. This group of two single storey houses was completed one year before Mellor retired, but was designed by architect Harvey Freeman who worked for Mellor. The larger of the two houses was commissioned first and is of a slightly higher specification than the second. Mr. and Mrs. Howard were surprised to receive a positive response from the local authority when they asked to build a second dwelling for her parents. Planar walls of flint lime facing masonry help to frame views across the river Bollin and the low horizontal datum of the extruded single storey places the buildings sensitively within the landscape. The use of walls and box hedges as governing elements to the external spaces call to mind Jacobsen at St. Catherine’s College, as does the anecdote concerning the transfer of curtains from one house to another without the need for adjustment; the proportions were exactly the same. The larger house has now been sold and remodeled without sensitivity, the smaller is now the home of Mrs. Howard and was extended by Harvey Freeman early into his retirement. The scheme was shortlisted for a regional RIBA award in 1969. 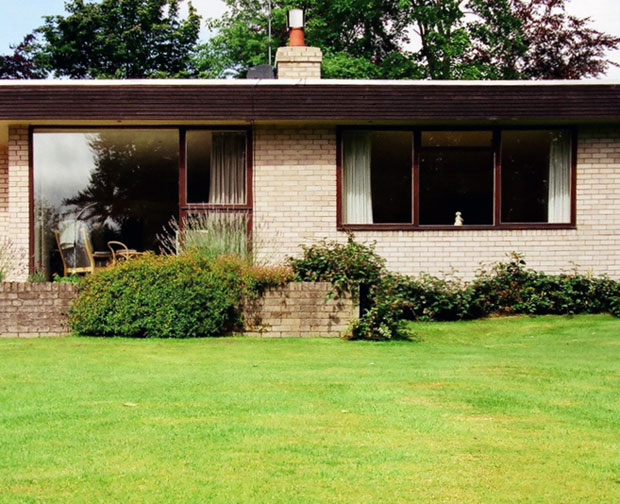