The offices of LRW were adjacent to this, one of their series of commercial buildings, others found here. Even in the 1960s LRW were a well-established commercial firm, and though the body of work from this period feels like the work of a young, energised company. LRW were actually formed in 1890 and practised under their current title after 1950. Even in the 1960s they were considered by the architectural establishment as a commercial practice, there is scant information from journals of the period about either the practice or their buildings. The full scheme was set to develop ten blocks on the site including a fifteen-storey tower, but was never fully realised. The construction methodology was an extension of the principles established in earlier projects Byrom House and Brazennose House. The original tenants were the Guardian and Manchester Evening News and the names of the following blocks all assumed those of typefaces. As well as Aldine, there was Baskerville, Cloister and Delphian. The pre-cast concrete window unit that defined the four blocks around a courtyard has a groovy curved profile; similar modular panels can be seen on Highland House and Ridgefield House on John Dalton Street (converted by Stephenson Bell in 1999). The repetitive façade terminates in bold ribbed cores that help define the ends and corner turns of the group, unfortunately this demarcation was not sufficient for the management company as a threshold and an unsightly foyer and tensile PTFE canopy were added in the 1990s to fully enclose the courtyard. Subsequently the foyer and courtyard have been redeveloped for a second time with a bold, if not refined, landscape scheme that is relatively complimentary to the existing fabric. 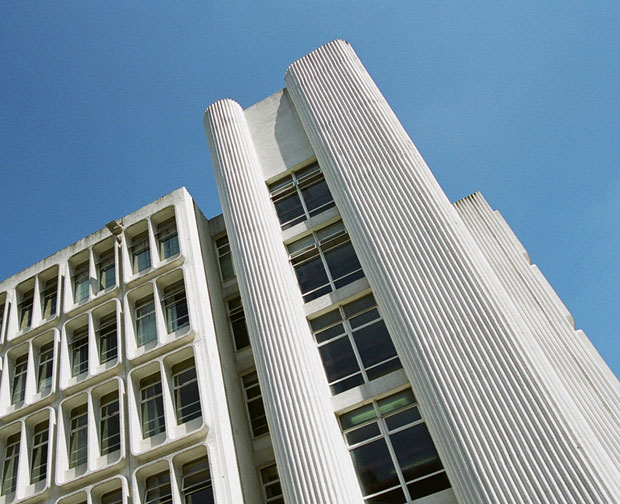