Gateway House is so named, as it is reflective of both its position in the city and also the intent behind the design brief. The scheme was the first of its scale to be constructed on land that had become surplus to British Rail and it was BR that stipulated many of the functional and aesthetic requirements concerning circulation, approach, linkage and presence. The curving plan is a direct response to the desire for an ‘imposing setting’ and the need to work with a narrow site on existing masonry piers and arches. The modular systems in the building, aluminium curtain walls and standard section steel structure, were required to minimise costs. The glazing frames were cut on site to negotiate any issues with tolerance and the setting out of the building employed early CAD technology, which over the 145m length of the building was accurate to 9.5mm. Despite the controlled architectural expression, there are some typical Seifert elements, the mosaic clad twisting columns being the most overt, there are similar such at Liverpool Lime Street and at the foot of Alpha Tower in Birmingham. The fibreglass murals around the lift cores are by William Mitchell. 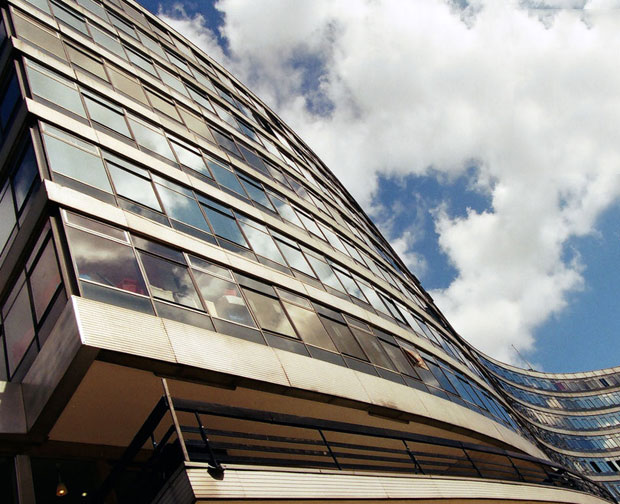