Preparations for the site and building began in 1960 and the church, referred to as ‘a memorial to their (the parishioners) zeal and labours’, privately blessed and opened 28th March 1963. The changing liturgy was very much in the thoughts of Rev. John A. Murphy, Bishop of Shrewsbury. Murphy stipulated that ‘the High Altar should be such that Mass could be celebrated facing the people’. The architect’s solution at this stage, before new models of churches with centrally placed altars, was to divide the congregation into three, a group on each side within the transepts and a group centrally within a shortened nave. All three groups were brought as close to the altar as circulation would permit. The choir was positioned behind the celebrant, in the Lady Chapel, and thus the congregation were effectively ‘gathered’ around the altar. This distribution of the parishioners in this way meant that rather than cruciform, the church became rectangular in plan. The sanctuary is flanked on four sides by the narthex, baptistery, sacristies, confessionals and the Lady Chapel and overlooked by two galleries, which allow the church to hold up to 400 people. The church is topped with a rather unusual dome, which implies a slight Byzantine influence. Whether or not the domed roof was a response to the organization of the building and its resultant plan form is unclear. The effect of compression and release as one moves through the narthex and into the sanctuary is noticeable and the deliberate spatial effects are further managed, and the eye drawn, by the polished aluminium light pendant, designed by McLoughlin of Dublin to Massey’s concept. The daylighting is ample, but subdued in a deliberate gesture to increase the prominence of the striking glass wall to the west nave. The wall is in nine panels depicting the story of St. Raphael and Tobias, it was designed by Pierre Fourmaintraux of Whitefriars Studios. In addition to the glass, the church retains its original ceramic stations of the cross and holy water stoops by Alan Boyson. As well as the work of Boyson, Fourmaintraux and that directed by Massey, the church originally had an external ceramic frieze, also of Tobias and St. Raphael as the subject. It was designed by Pilkington’s Tiles, but sadly suffered at the hands of the inclement weather on the edge of the moors and replaced with the undulating and angled pattern seen today. 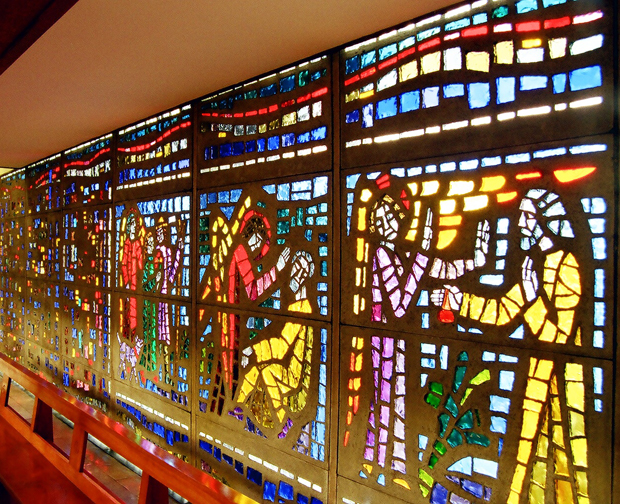