Urbis was the ‘museum of the city’. The site, a car park prior to the IRA bomb of 1996, formed a portion of the winning masterplan in the competition to re-design the city centre. The iconic glass form straddles the void between the former Corn Exchange, now a shopping centre, and Victoria Station. The building is addressed almost entirely by historic facades, though of different eras. The almost uniform glazed enclosure simply reflects the context and thus the dialogue between this and its neighbours is reduced to the same repeated response. The sloping roof and curved forms perform admirably in respect of their urban presence and formal cohesion. The tall wall to Cross Street balances the massing of the streetscape, the prow proudly points toward the newly formed Exchange Square and the pivoted plan form wraps and encloses the new Cathedral Gardens to the rear. The access to the building and the relationship between the internal and external spaces is less successful. Urbis was a the sort of turn of the century project that was all bells and whistles and bang in the middle of New Labour's reign and the booming economy expressed no more so than in Manchester's retail heartland. The museum never really found its feet and, despite increasingly relevant and purposeful exhibitions, was sentenced to closure in 2010. The entrance has now been remodelled and the buidling is now home to the National Football Museum, which was controversially relocated from a purpose built home in Preston. 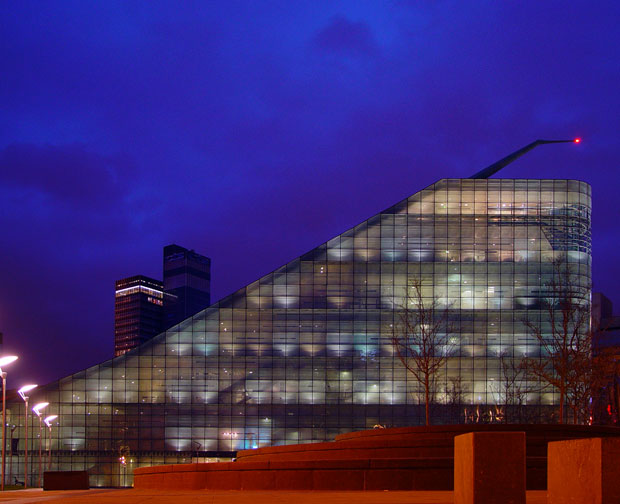