The Radisson Hotel is the former Free Trade Hall, controversially sold to a private developer by Manchester City Council in 1997. The original building by Edward Walters (1856) was long home to public debates and cultural events for the people of the city. The building was damaged in the Manchester Blitz of 1940-41 and opened after post-war refurbishment, directed by L.C. Howitt, in 1951. It was the home of the Halle Orchestra until the construction of the Bridgewater Hall (RHWL, 1996). Whilst the collision of the old and new geometries could have been more formally expressive internally, externally the building exemplified the developed studio style of Stephenson Bell; a considered exercise in formal composition with more than a nod to the planar exploits of the de Stijl school and Mies van der Rohe. The new accommodation block to the rear, in stone and glass, is connected to the Peter Street volume by a fully glazed atrium including structural glass elements. The front section of the scheme that retains original facades houses those functions with a greater space requirement. The lounge bar contains fantastically opulent fittings and a gallery space within the original loggia. 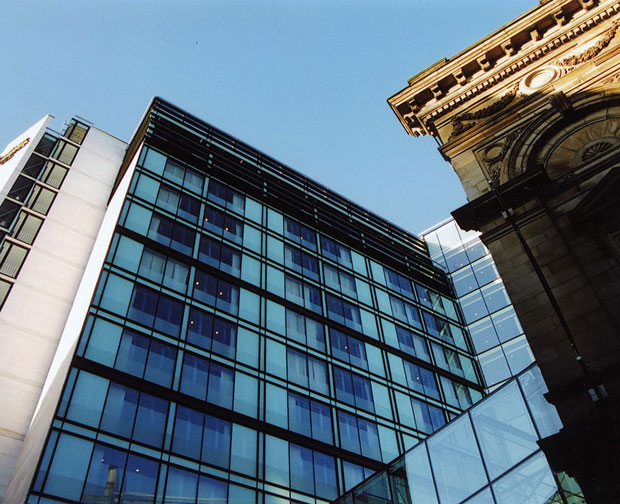